What & Where is Abhaneri Stepwell? Chand Bawdi History, Timing and Full info

What and where is Abhaneri Stepwell? It’s a historical baodi (step well) located in a village named Abhaneri in Dausa district. The iconic structure attracts thousands of tourists every day and it is among the must visit offbeat places during your Jaipur trip. 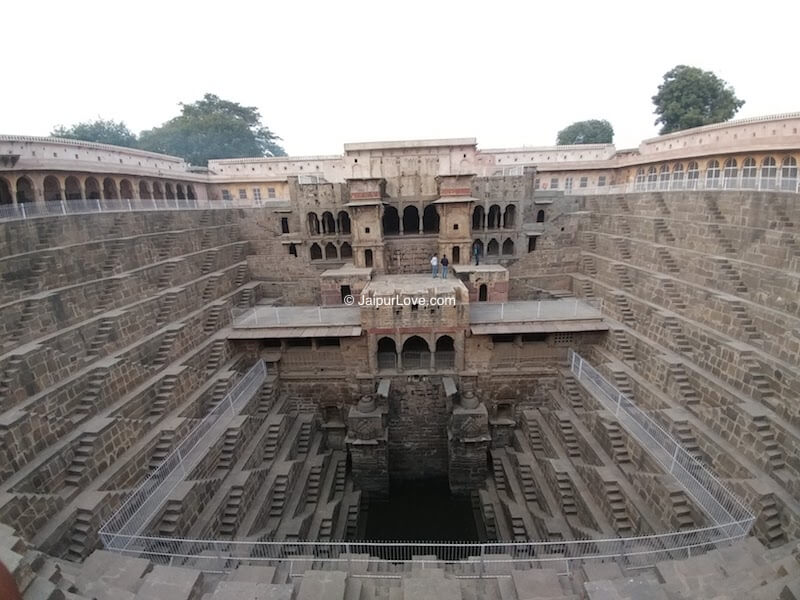 The famous stepwell is located in the Eastern part of Rajasthan, in a less touristy district Dausa. It’s a historic place, believed to be constructed in 9th century during Nikumbh Dynasti headed by King Raja Chand also known by the name Samrat Mihir Bhoja.

Let’s get into the details of this architectural wonder of Rajasthan.

It wouldn’t be fair if I don’t start this section with the history of Chand Bawdi. As aforementioned, it was built during 9th century, the Nikumbh Dynasty of King Raja Chand.

Located in a village named Abhaneri near Bandikui, the place attracts hundreds of tourists every day for its architecture and ruins. The village name, Abhaneri means the city of joy as Abha in Hindi means Joy and Neri was shortened with time from Nagri which means city. 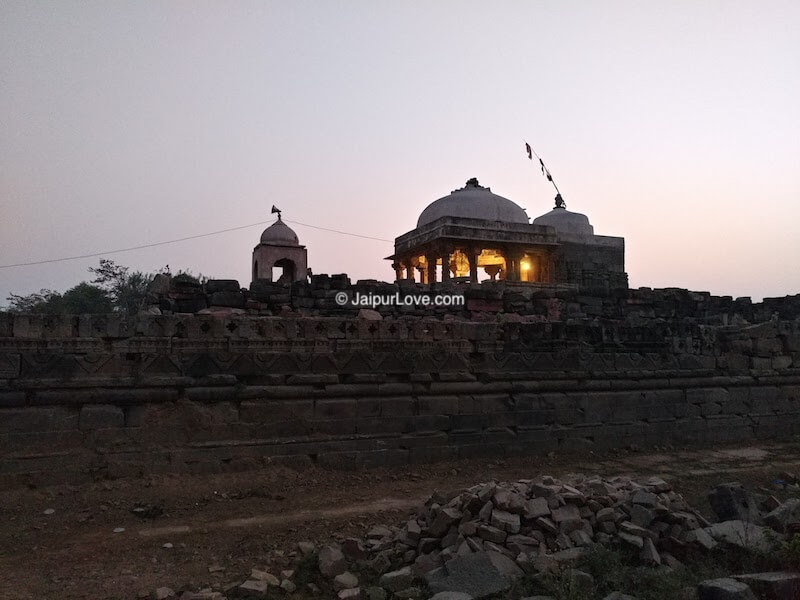 It was believed by the local people that the village has blessings of Goddess Harshat Mata who is the Goddess of Joy. A dedicated temple of Harshat Mata was also constructed along with Chand Baowri during the same period. Later the temple was destroyed by Mahmud Ghazni during his power hunger drive in the state.

Ruined statues from the temple are kept inside the Chand Bawdi and you can easily notice the broken faces of the Gods and Goddesses statues. 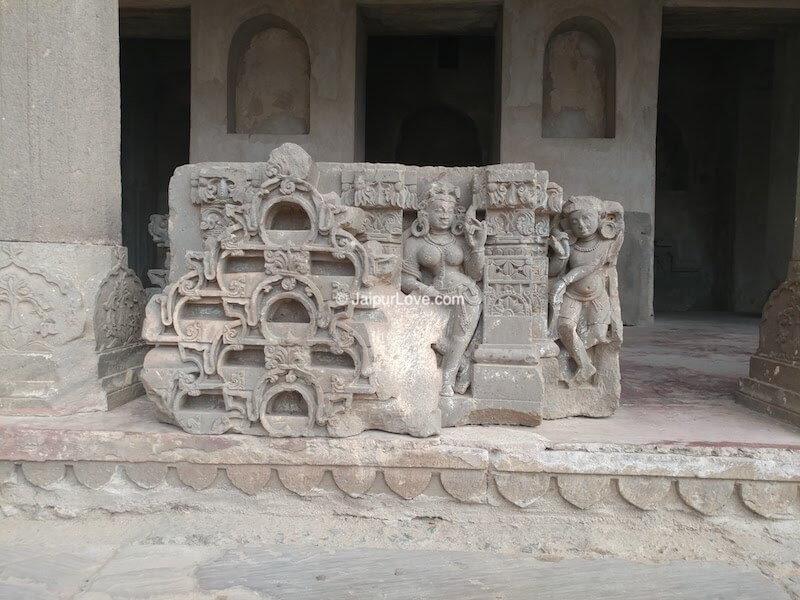 The locals and the traders in the nearby area used to worship Harshat Mata, expecting her to continue blessing the town with her Abha, Joy.

The temple is still there, the Goddess being worshipped by the locals and can be visited by the tourists as well. One can notice the ruin around the temple.

Coming back to the Abhaneri step well history, the architecture was built to preserve water as the area is prone to drought and lesser rain during monsoon period. 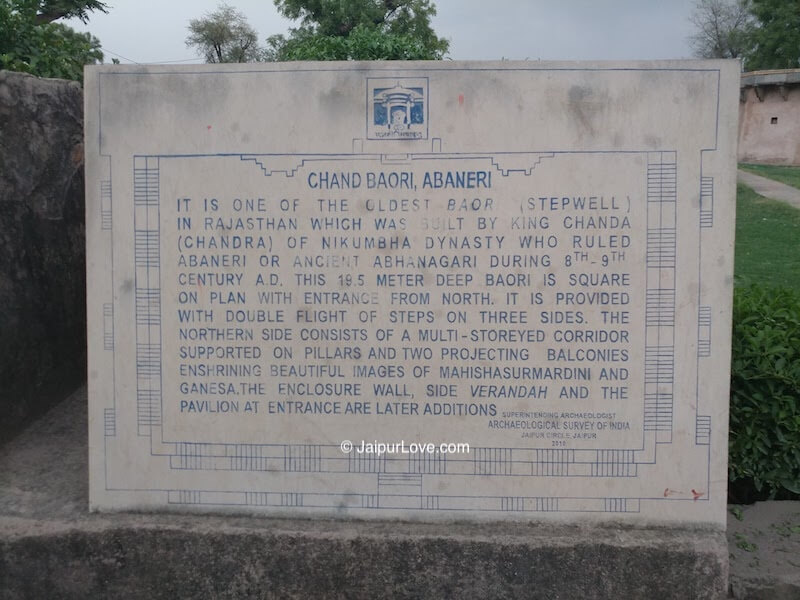 The architecture was designed in a way that there is no chance you can repeat the same set of stairs for walking down and coming up. The stairs always keeps a pair of light and shadow, giving an iconic look during the daytime.

During the full moon night, the steps sparkle but unfortunately, it can be visited during the day hours only.

The Chand Stepwell in Abhaneri is about 20 meter deep, having 13 levels of stairs and has a purpose of storing the rainwater. It’s a clear example of old techniques of preserving rainwater and keeping it safe for longer usage. 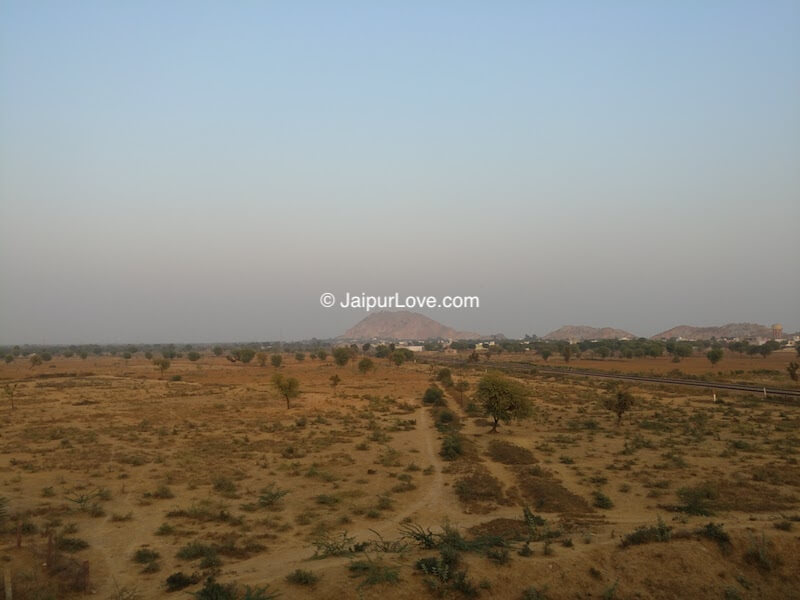 Later, a palace was constructed around the step well was used by the ruler of the kingdom.

What is Abhaneri Festival?

A two day festival was organized by the Rajasthan Tourism and District Administration of Dausa district in Abhaneri village to put local artists and musicians in front of the tourists and visitors. Abhaneri festival was started on October 1, 2016.

As a movie buff and huge fan of Batman comic world, I was taken up by a surprise when I discovered that the director of Dark Knight Rises, Christopher Nolan combined two different historic places of Rajasthan and portrayed it in a single frame, as a single place.

If you remember the particular scene where Ben leaves Bruce inside the well, that scene was actually shot at Chand Bawdi in Abhaneri.

The beauty of Nolan’s creation is that the top well scene was actually shot in a well behind Mehrangarh Fort in Jodhpur while the interior of good scenes was shot at Chand Bawdi Stepwell. Now you know the answer to Dark Knight well scene location.

He combined the two places to create a single fictional place. Impressive, isn’t it?

Looking for quick facts check? Let’s start with them if you’re in hurry and haven’t read the aforementioned details.

Entry is Free but there is about 20 INR parking fee if you’re driving a personal car.

Tourists can visit and see the beauty of Chand Baori during day hours only. As the sun sets, it is closed as per the rules set by archaeological department.

How to Reach Abhaneri Step Well from Jaipur?

If you’re driving, take the route to Agra and start driving till Sikandara. From there, you need to take a Left turn towards Bandikui and then a right turn from Gol Market towards Abhaneri. 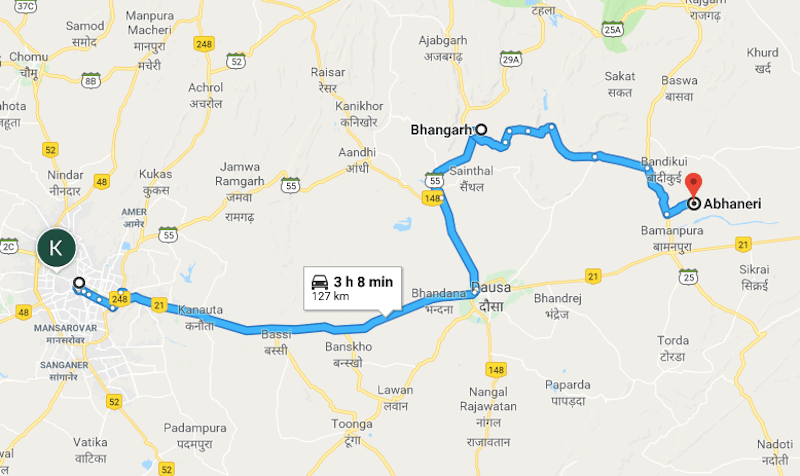 In case you’re planning to visit Bhangarh first, then take a Left from Dausa and then follow the Map as shown in the screenshot below.

You can also take the Ramgarh then Aandhi then Bhangarh route but the road condition is not that good as the Dausa one.

How to Reach Chand Baori from Delhi?

There are two routes one can follow to reach Chand Baori in Abhaneri from Delhi. Both starts with the NH48 from Delhi and going towards Alwar. One can reach Alwar via Bhiwadi route or from Behror route. I prefer Behror route as it has a better road and lesser traffic. 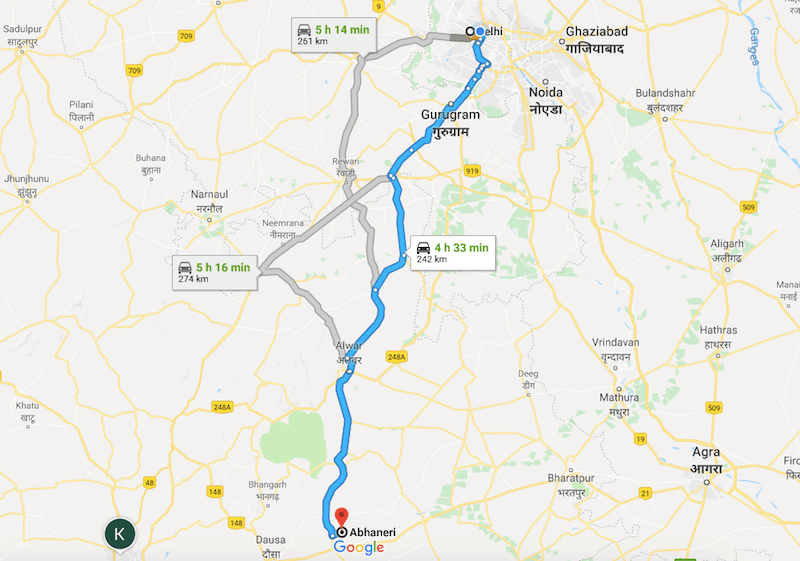 After Alwar, you take the road to Rajgarh then continue towards Sikandara on Agra highway. About 10 KMs before Sikandara you’ll get a Left turn towards Abhaneri village.

From Alwar, you can even plan a visit to Sariska and then reach Abhaneri but that will require an additional day (at least).

How to Reach Abhaneri Stepwell from Agra?

From Agra you need to start driving towards Jaipur till Sikandara and the take a right towards Bandikui. Before Bandikui, there will be a Right turn towards Abhaneri. 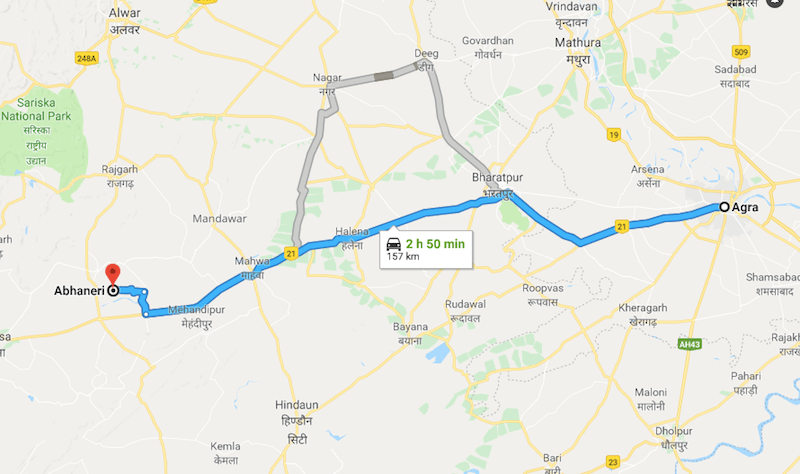 There are just two places near Abhaneri step well which I’ll recommend a tourist to visit. One is Harshat Mata temple which is just outside the step well while the other one is the haunted fort of Bhangarh which is about 2 hours drive away. 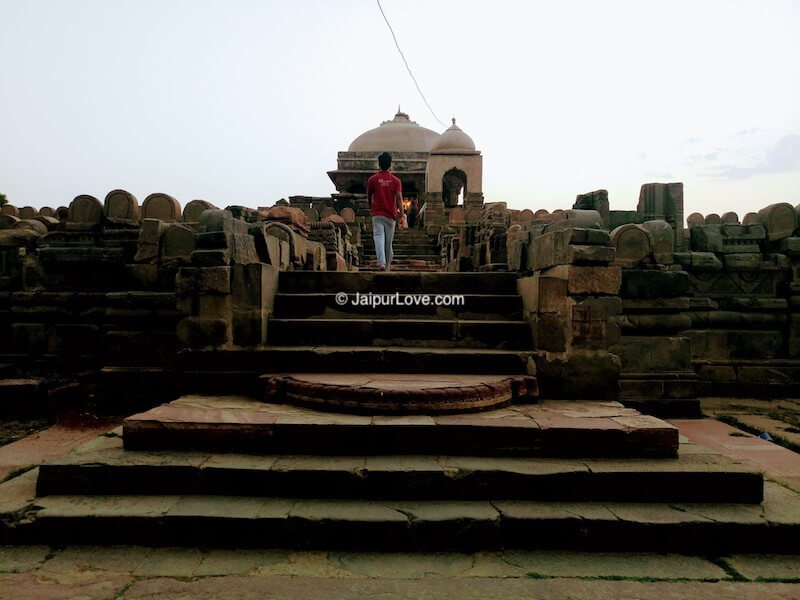 If you are looking for accommodation options in Abhaneri village then there is just one named Abhaneri Village Safari Camp. There is hardly any better hotel or even a restaurant worth recommending in nearby areas.

I recommend one to start from Jaipur or Delhi or Agra with proper meal and carry a meal if necessary. Or one can try out the available restaurants but I hardly believe a tourist will like any.

In short, it’s recommended to start early from Jaipur or Delhi or Agra, reach Abhaneri Stepwell, see it around during day hours and come back from where you started or to any of the three big cities mentioned before the sun sets.

Q – Bus from Dausa to Abhaneri?
A – You can find Dausa to Bandikui bus or sharing four wheeler cabs and make a stop at Abhaneri circle.

Q – Jaipur to Abhaneri bus?
A – You can take a Jaipur to Agra bus till Sikandara and from there you can easily find sharing or personal four wheeler vehicles to drive till Abhaneri.

If you’ve come this far and still couldn’t decide whether to visit Abhaneri or not then I recommend taking the step ahead and visit the place. You’ll have one of the finest memories from Rajasthan which cannot be matched by any other. 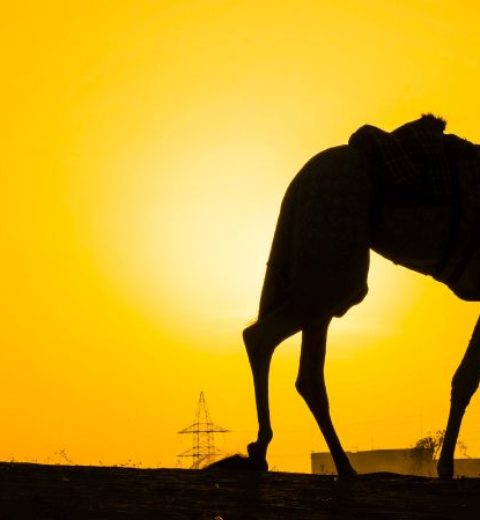 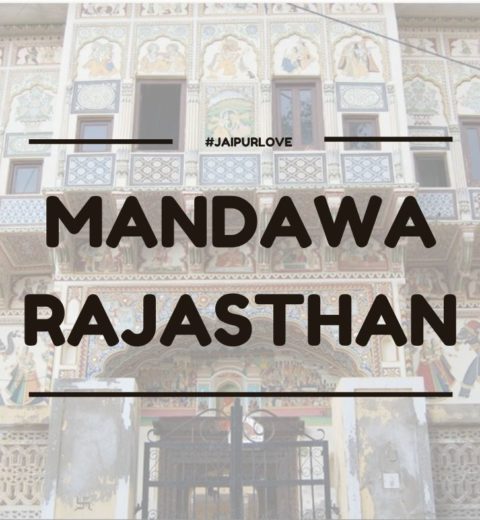 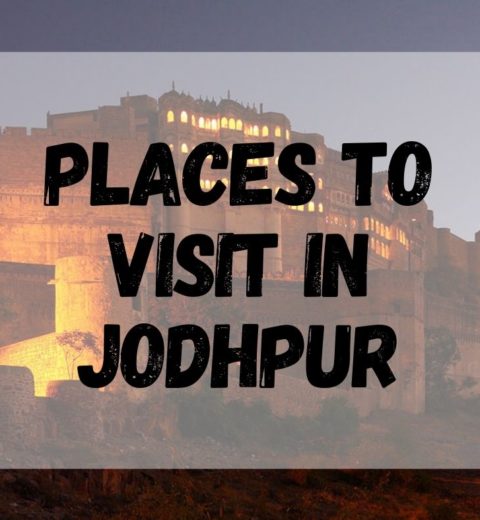