Doing social work for a day or two is itself a proud thing but how about when someone does it continuously for a year?

In the world of social media, you may have come across occasional social workers but this blogger from Chittorgarh city of Rajasthan is not just any other social worker. In fact, he doesn’t consider himself one.

Many pompous politicians take up a broom for street cleaning drive to get themselves in the news for obvious reasons but it has never made a difference and never will make a difference.

Rajasthan is a state with limited resources but abundant tourism opportunities. Interestingly, a major chunk of the population depends on the tourism industry for their livelihood. But many times, due to unawareness or ignorance the heritage properties are dumped with litter and garbage by our own people. It is a bad dream for the industry and Rajasthan’s reputation.

The prime motto of ‘Our Heritage is our responsibility’ is to make the heritage properties litter free and generate awareness amongst locals for clean India.

Manish Lamroad is a full-time blogger, founder of ChittorgarhDarpan who has started the campaign to clean the world-famous Chittorgarh Fort. This started as a two guy’s weekend contribution soon gained popularity in the historical city. Till now over 500 volunteers have contributed in the form of physical work and the numbers are growing significantly.

Question: How and when did the clean Chittor movement start?

Answer: I still remember the date it was the 9th of June 2019. Viewpoint in Chittorgarh Fort is a popular hanging out place for the locals of Chitor city. I went there with a friend and something didn’t fit well. I saw a foreigner couple at the place but they were not comfortable. There were plastic bags, wrappers, glass bottles, and all kinds of garbage downhill. As an Indian, I was embarrassed, as a Chittor native I was embarrassed. That incident triggered the thought that our heritage is our responsibility and from the next weekend itself we started the campaign.

Question: Usually, people do not accept a new idea easily. What kind of hurdles did you face to carry on the project activities?

Answer: I never had any intentions of gaining popularity or to show off what I was doing for the community. Therefore, I started with Rajesh a close friend. For initial days, it was just two of us cleaning the litter for 3-4 hours every weekend. But thankfully our families and friends were very supportive and many started to join us for the cause. We were also joined by local NGO workers.

On the other hand, when the movement got little publicity, some people decided to capitalize on the opportunity for fame and for their other selfish motives. But we were determined to not allow anyone to use the mission for their personal benefits. Soon, they understood and stopped bothering.

Question: How many active members are associated with you?

Answer: Initially, the ‘Aapni Virasat Aapni Jimmedari’ movement was started by me and Rajesh only. The numbers grew slowly and today we are a 500+ strong team with a common goal; Clean Chittorgarh.

However, the active members are 20-30 only but rest participates in our cleaning drives regularly. We are also supported by some NGOs and local schools.

The team contributes by cleaning litter, plastic and glass bottles every Sunday, from 7 AM to 10 AM. Anyone is free to join and contribute.

Question: Why Chittorgarh Fort only? Do you intend to lead and expand the movement to other cities and heritage sites?

Answer: It wasn’t a planned thing, a random bright day and something triggered us to start this movement. The response from locals and everybody is overwhelming and beyond our expectations. For now, we will stick to Chittorgarh Fort only but would love if the ‘Aapni Virasat Aapni Jimmedari’ movement gets a platform in all over Rajasthan.

Question: What message would you like to give to our readers and youth who want to make a difference?

Answer: You are the change. You are empowered to make the right choice. Our heritage is the symbol of our rich culture. Please do not throw litter anywhere but in dustbins. Form small groups and you can also start these campaigns at the community level. Let us show the world we can bring positive change.

If you liked the story, do share it with your social friends and motivate everyone in your network to take the challenge of keeping the local area clean. If you know a person or similar story worth sharing, get in touch with us and we’ll be happy to share it with all our readers. 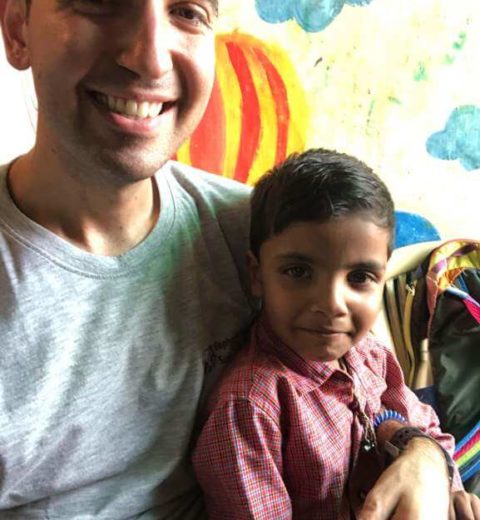 Teaching English in a Jaipur slum as a foreigner