What is Govind Devji? It is a temple dedicated to Lord Krishna popularly called Govind. This temple is a place of worship for Hindus from all around the world. It is situated in the center of Jaipur city.

Where is Govind Dev Ji Temple?

It is located in the Jai Niwas Garden of City Palace complex, Jaipur.

Temple opens at 4:30 in the morning and closes by 9:30 in the night. The timings for Pujan & Darshan vary in different seasons. Here is a detailed list of darshan and aarti timings in Govind Devji Temple during summer days-

How to reach Govind Devji Temple in Jaipur?

The temple is located in the heart of the walled city of Jaipur, Jaleb Chowk. The place is very well connected to every part of the town by buses, cabs, cars, taxis, and e-rickshaws. One may have to park their vehicles at the Jaleb Chowk only.

And from there the main temple is 100 meters away. For old age people and differently-abled persons, a free shuttle service is provided within the temple complex from the temple administration.

Following is a list of nearest bus stand, railways station & airport with their respective distance from Govind Devji temple –

Shri Shiv Ram Goswami was the sewadhikari (caretaker) of Lord Govind Devji in the 15th century. During the reign of Mughal emperor Aurangzeb, many Hindu temples were being razed.

Shri Shiv Ram Goswami shifted the holy images by bullock carts first to Kama (Bharatpur), Radhakund, and then to Govindpura village (Sanganer). Then Amer rulers provided protection for shifting the holy images. In 1714, the divine images reached Kanak Vrindavan in Amer Valley. And finally, in 1715 they were taken to Jai Niwas in Amer.

For years Amer rulers couldn’t provide safety to holy images on their own because they were serving the Mughal courts and didn’t want to attract the wrath of the Mughal emperor.

As per local belief, Sawai Jai Singh lived in Suraj Mahal first. One divine day he dreamt that he should vacate the palace as it was meant for Shree Govind Devji himself. As a result, he left the place and went to Chandra Mahal. And thus, Lord Govind Dev Ji enshrined in Suraj Mahal before even the foundation of Jaipur was laid.

As per popular legend, the holy image in Govind Devji temple looks exactly like Lord Krishna from his incarnation days.

He created an image of Lord Krishna on the description given by her. However, she said that only the feet of the image looked like those of Krishna Bhagwan. Shri Bajranath Ji created the second image after making the necessary adjustments. But again, she said nothing but the chest of the image looks like that of Lord Krishna. Finally, he made the third image and showed it to her. She rejoiced and nodded that this is how Lord Krishna looked like.

Time travel of the divine images of Govind Devji Bhagwan

Holy divine images were immersed in the deep sand of thousand of years. And by the 16th century, there was no trace left of the glorious Hindu past. 500 years ago, Chaitanya Mahaprabhu Ji was born on Indian soil. He tried to rediscover the forgotten site in 1514 AD.

Vrindavan by now was covered with thick jungle. With the help of texts in Bhagwad Purana, he was able to locate some places in Vrindavan. But, he couldn’t stay long to complete the holy task.

One night in 1525 AD Lord Govind Devji came into Roop Goswami’s dream and revealed his sacred place at Goma Teela in Vrindavan.

Thus, the divine images of Govind Dev Ji were revealed to the world. Mughal King Akbar himself gave 135 bighas of land for the construction of a temple in Vrindavan.

Henceforth, Maharaja Man Singh of Amber constructed the temple at the same Goma Teela in Vrindavan in 1590 AD. Later the temple’s 4 floors were destroyed by Mughal forces. However, the images were saved by Shri Shiv Ram Goswami Ji.

The sacred image of Radharani was taken to Orrisa by a Brahmin due to the increasing danger of destruction. It was worshipped there as Lakshmi Thakurani.

When the king of Radhanagar in Orrisa learned about the appearance of Lord Govind Devji in Vrindavan he sent the holy image to Vrindavan. The divine image of Shakti Swaroopa Radha Rani was placed to the left of Bhagwan Govind Devji in 1690 AD.

Govind Devji and Rulers of Jaipur

Maharaja Pratap Singh Ji built Hawamahal in the shape of the Crown of Lord Krishna and wrote poems of devotion.

When Jaipur state was annexed in Rajasthan after Independence, then rulers of Jaipur said that the kingdom is of Lord Govind Devji and it will remain of Govind Devji only. We will continue serving with his blessings.

The temple is built of sandstone and marble. From time to time renovations were carried out but the beauty of the temple was kept intact. The temple is spread in a vast area surrounded by greenery. It was built in the grid saved for the royal family. Therefore, the temple resembles a Palace.

City Palace is on the southern side of the temple and the northern side is covered by Jai Niwas Garden.

The holy images are seated on the Garbhgraha plinth facing south. The darshan hall is so huge that it could accommodate over 5000 people easily. The interior walls are colored pink and pillars, the roof is engraved with floral work. The grand chandeliers add grace to the beautiful buildings.

Late Shri Pradhyuman Kumar Goswami Ji wanted a separate hall where religious and cultural activities could be performed without any hindrances.

Satsang Hall of Govind Devji Mandir is recorded in Guinness Book of World Records as the World’s widest R.C.C flat roof construction with a single span of 118 ft.

Some interesting facts about Satsang Hall in Govind Devji Temple –

Holy Prasad is prepared in the kitchen of the mandir only. The Laddoo Prasad is so tasty that it is liked by children and adults alike. But due to limited preparation space, the quantity is fixed per person.

The purchase is limited to a maximum of 5 pieces per person. It could be purchased in the Temple complex only.

Although, the temple is visited by thousands of devotees every day during the eve of Shree Krishna Janmashtmi the visitor’s count reaches lakhs.

Cultural events are held all round the year but during Falgun month (February – March) artists perform a mesmerizing traditional dance in the royal court of Shree Govind Devji.

To witness thousands of devotees chanting Hare Rama Hare Krishna in the hall is a heavenly experience for ears and mind.

Other places of interest around Govind Devji Temple

The temple is situated in the center of all tourism and commercial activities in Jaipur. There is a lot to explore around the temple. Here is a brief list of places of interest with their respective distances from Govind Devji Temple –

You can also have live darshan of Govind Devji over here. This was all about the Govind Devji Temple visit you’re planning and in my opinion, you must do it to complete the religious tour of Jaipur. Do share it with all your friends and you can also follow us on Facebook. 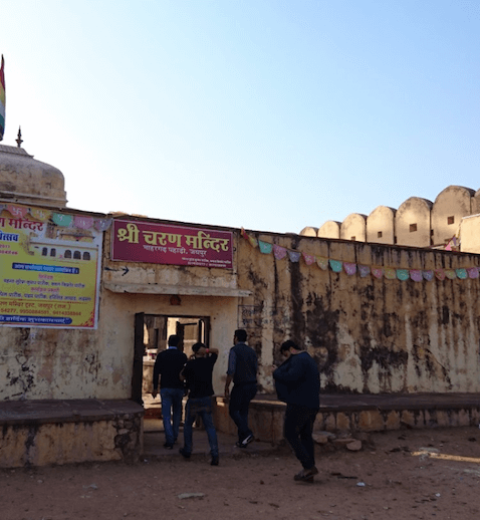 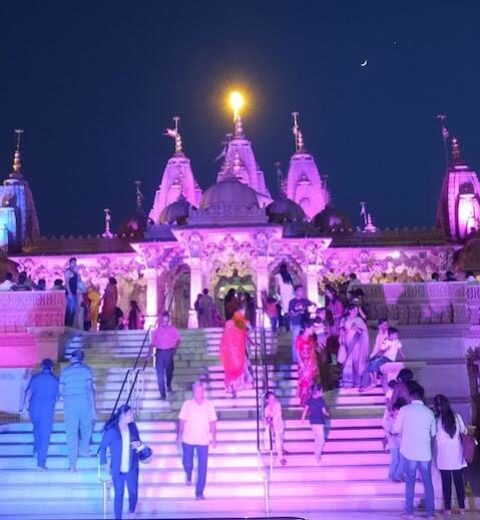 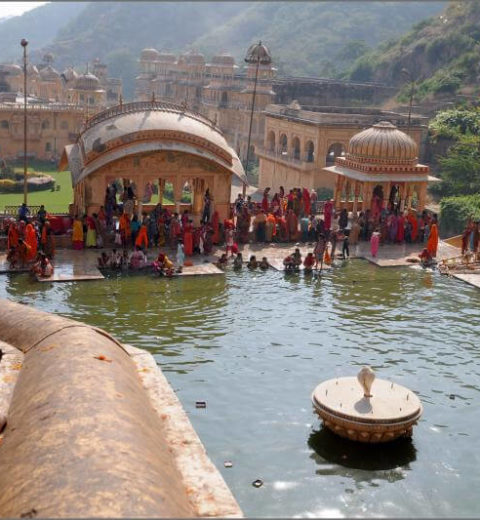 Galta Temple or Monkey Temple Timing, Facts, History and How to Reach