What is Govind Devji? Govind Dev Ji Mandir is a temple dedicated to Bhagwan Krishna popularly called Govind. This is one of the major Krishna temples in the entire world. Devotees visit this temple from all around the world. It is situated in the center of Jaipur city. Let us learn about the history of Govind Dev Ji.

Where is Govind Dev Ji Temple?

It is located in the Jai Niwas Garden of City Palace complex, Jaipur.

Shri Shiv Ram Goswami was the sewadhikari (caretaker) of Lord Govind Devji in the 15th century. During the reign of the Mughal emperor Aurangzeb, many Hindu temples were razed.

Shri Shiv Ram Goswami shifted the holy images by bullock carts first to Kama (Bharatpur), Radhakund, and then to Govindpura village (Sanganer). Then Amer rulers provided protection for shifting the holy images. In 1714, the divine images reached Kanak Vrindavan in Amer Valley. And finally, in 1715 they were taken to Jai Niwas in Amer.

For years Amer rulers couldn’t provide safety to holy images on their own because they were serving the Mughal courts and didn’t want to attract the wrath of the Mughal emperor.

As per local belief, Sawai Jai Singh lived in Suraj Mahal first. One divine day he dreamt that he should vacate the palace as it was meant for Shree Govind Devji himself. As a result, he left the place and went to Chandra Mahal. And thus, Lord Govind Dev Ji was enshrined in Suraj Mahal before even the foundation of Jaipur was laid.

As per popular legend, the holy image in Govind Devji temple looks exactly like Lord Krishna from his incarnation days.

He created an image of Lord Krishna in the description given by her. However, she said that only the feet of the image looked like those of Krishna Bhagwan. Shri Bajranath Ji created the second image after making the necessary adjustments. But again, she said nothing but the chest of the image looks like that of Lord Krishna. Finally, he made the third image and showed it to her. She rejoiced and nodded that this is what Lord Krishna looked like.

Time travel of the divine images of Govind Devji Bhagwan

Holy divine images were immersed in the deep sand of thousands of years. And by the 16th century, there was no trace left of the glorious Hindu past. 500 years ago, Chaitanya Mahaprabhu Ji was born on Indian soil. He tried to rediscover the forgotten site in 1514 AD.

Vrindavan by now was covered with thick jungle. With the help of texts in Bhagwad Purana, he was able to locate some places in Vrindavan. But, he couldn’t stay long to complete the holy task.

One night in 1525 AD Lord Govind Devji came into Roop Goswami’s dream and revealed his sacred place at Goma Teela in Vrindavan.

Thus, the divine images of Govind Dev Ji were revealed to the world. Mughal King Akbar himself gave 135 bighas of land for the construction of a temple in Vrindavan.

Henceforth, Maharaja Man Singh of Amber constructed the temple at the same Goma Teela in Vrindavan in 1590 AD. Later the temple’s 4 floors were destroyed by Mughal forces. However, the images were saved by Shri Shiv Ram Goswami Ji.

The sacred image of Radharani was taken to Orrisa by a Brahmin due to the increasing danger of destruction. It was worshipped there as Lakshmi Thakurani.

When the king of Radhanagar in Orrisa learned about the appearance of Lord Govind Devji in Vrindavan he sent the holy image to Vrindavan. The divine image of Shakti Swaroopa Radha Rani was placed to the left of Bhagwan Govind Devji in 1690 AD. 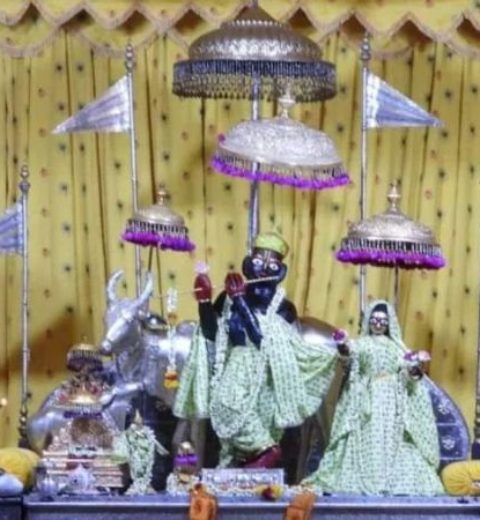 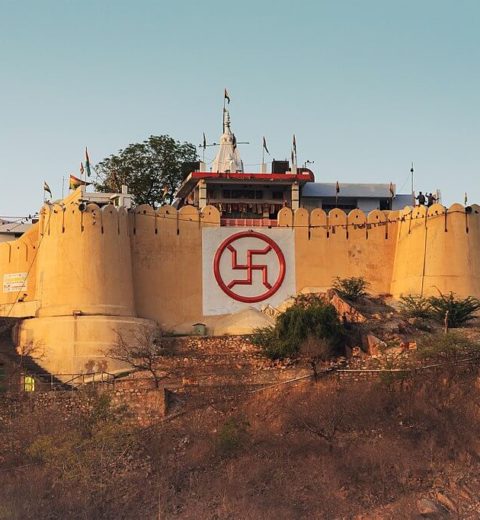 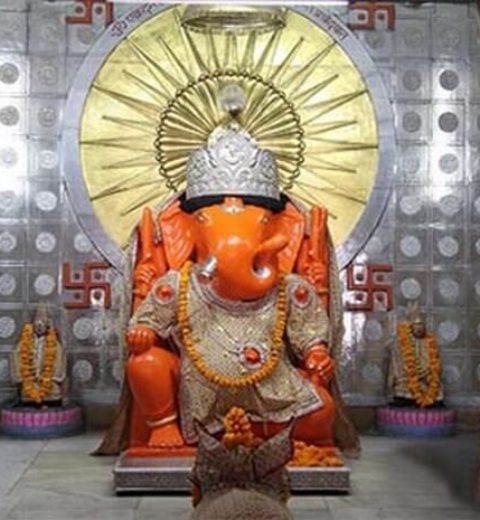